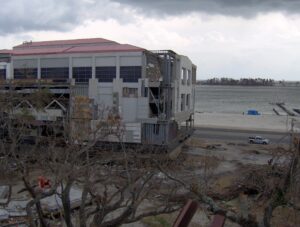 The analogy of a “casino” to describe climate change related catastrophes has gained some recent traction, thanks mostly to Paul Beckwith’s frequent use of this terminology in his blog posts and YouTube videos. At first, the word “casino” seems to be an appropriate metaphor.  “Casino” describes the apparently random way that fires, floods, droughts, heat waves and other climate-related catastrophes are striking apparently random locations with random intensities and consequences.  Pick a location and give odds for what catastrophe is going to strike there next.  Spoiler: the answer is 100%.

As someone whose career was focused for over a decade in the casino industry (my casino website is www.advancedadvantageplay.com and my YouTube channel is AdvancedAdvantagePlay), I am not comfortable with this analogy.  One of my primary activities as a consultant in the industry was finding legal ways to beat casino games and writing about those methods.  I also devoted considerable mathematical energy to analyzing “normal” outcomes for games and identifying issues with games based on a risk-analysis of  historical outcomes.  My understanding of the mathematical risks associated with climate change comes directly from my understanding of risks the player and house are taking in a casino setting.

What is true (and you may have an aunt or uncle who can testify to this) is that in casinos there are always long-term winners, just by chance.  There are people who don’t know anything about the games they play who just by the grace of being that lucky statistical outlier (which must exist) end up beating the house for months or years or maybe their whole lives.  Someone wins the lottery.  Someone hits the slot jackpot. Casinos have winners.

There are also legal and legitimate ways to beat the games.  Ordinary blackjack card counting is probably the best known method.  You’ve no doubt heard of the MIT blackjack team.  A few years back, Phil Ivey (the famous poker player) beat a casino in the UK out of $12 million using a method called edge sorting that I wrote about.  I was Ivey’s expert witness in his case against Crockford’s.  Before that, Don Johnson beat three Atlantic City casinos out of $15 million using a method that I had analyzed.  Later I proved three mathematical theorems describing Johnson’s method.

Yes, there are random climate-driven catastrophes that happen.  Yes, they are getting more frequent, more intense and of longer duration.  But in the “climate casino” everyone is a loser. No amount of historical risk analysis is sufficient to know the future because the game itself is changing. The only question that remains is how much are we going to lose?  How bad is it going to get? Right now, it looks like everyone is going to lose everything.

More in the spirit of the “climate casino” analogy would be a game show like Wheel of Fortune, where you spin a wheel to see what horrible life-altering catastrophe is coming to your home town next.  Maybe, “Wheel of Catastrophe” is more apt to describe the situation that’s going on.  Put the 40 or so different possible major catastrophes around the wheel (as I have catalogued here) and have a spin.  As time goes on, each of those catastrophes on the wheel will trigger other catastrophes on the wheel and sections will merge to become mega-catastrophes.  This merging will continue until the wheel has one spot left that says “we’re all f**ked.”

I don’t like correcting the good intentions of those I greatly respect, especially when it comes to their metaphor of choice.  But “casino” is something I take personally.  Some people win in casinos — by luck, by skill or by cheating.  When it comes to climate change, however, there is no way to win. Everyone and everything on this small planet is a loser (well, maybe the green algae will win as it expands and suffocates our oceans).  The only question that remains for the Wheel of Catastrophe game show nightmare we are living through is how bad it’s going to get.