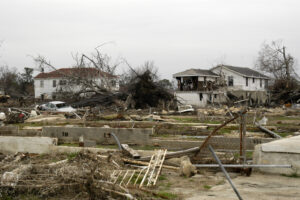 In this post, I list 77 current and future impacts of climate change, along with references for some of the more unexpected items.  That list was compiled scouring the web along with suggestions and comments to a Twitter post I made.  In retrospect, many of these items are redundant or speculative. And so, I refined that list down to 40 distinct and near certain short-term consequences, which is what I present here.

Most of these consequences are already happening to some degree. Many of these are harbingers of the collapse of modern industrial civilization.  Some of these are foretelling of the sixth great extinction.  All of them are extraordinarily sad.

As I write this, politicians all over the world continue to side with the fossil fuel industry. Greenhouse gasses, including CO2 and methane, continue to spike. The weather just gets more deadly and more chaotic.  It’s hard to believe we have until 2050 (net-zero) or even 2030 to get on track.  Truth: we don’t.

All it’s going to take is one more El Nino super-heating event (like 2016), one more La Nina drought in the Southwest US and one more summer of hellacious record highs, floods, heatwaves, hurricanes, crop failures and droughts.  That’s it — that’s all the buffer we have left to separate functioning modern civilization from becoming a hellscape, a condition that already exists in many third-world and less privileged countries.

I am not suggesting that this is a list of problems that will be “solved” by addressing climate change.  It’s too late for that. The events in this list will happen with ever increasing severity the deeper we get into the climate crisis.

There is so much suffering ahead.  Be kind, be generous, be of service.