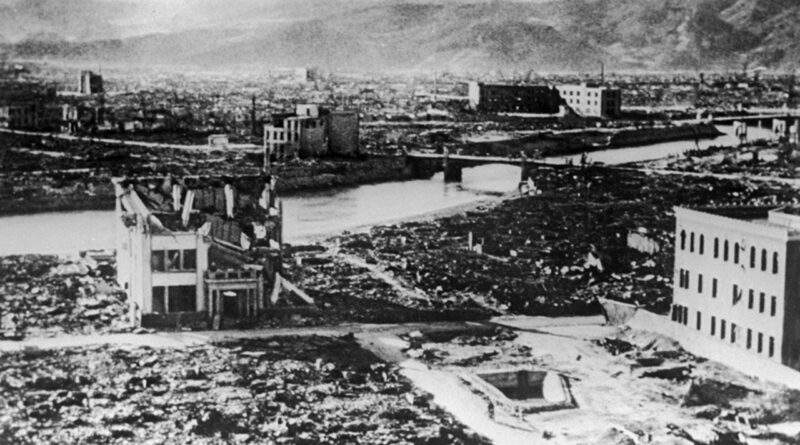 Okay, it happened again. Just this week, an article on mainstream media used the Hiroshima Bombs per Second (HpS) metaphor to describe how fast the planet is heating up. This time the conclusion was that the oceans are heating up at a rate of 5 HpS. And they got it Wrong! Wrong! Very wrong!

The calculation of HpS is straightforward and depends on a number called the Earth Energy Imbalance or EEI. This number is the difference between the totality of incoming solar radiation and outgoing radiation of all forms. The EEI is expressed in the units of Watts per square meter (W/m²). As Dr. James Hansen said on Twitter last December, “Earth’s energy imbalance is the best diagnostic of where climate is heading.”

In this article I computed HpS based on the EEI as published by NASA for the annualized 12 month period March 2021 to February 2022. My answer was 13.3 HpS globally. Given that about 90% of the EEI is captured by the oceans, this means about 12 HpS warming the oceans.

I’ve been eagerly awaiting an update to the NASA data. Just this week, thanks to some help by Leon Simmons, I was able to go to the CERES website and download the EEI data through August, 2022.

It turns out that the February 2022 number was a local maximum and things have been declining a bit since then. For the 12-month period September 2021 to August 2022, the EEI was 1.40 W/m², the equivalent of 11.4 HpS globally and 10.3 HpS into the oceans. Here is the full HpS record using a 12-month running mean: 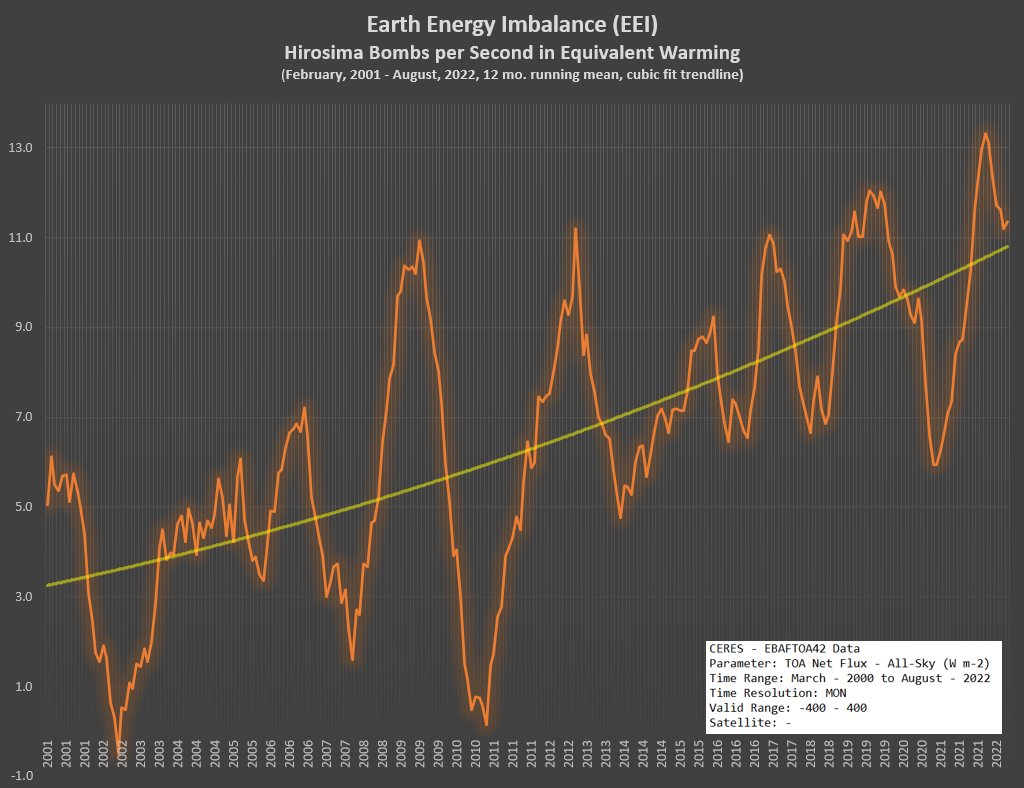 There’s a good reason to take the long view. As you can see by the graph above, there is a lot of year-to-year variability in the EEI. This variability is caused by many factors, including ENSO and other climate cycles, the solar cycle, global cloud cover, volcanism and any number of anthropogenic influences including the recent Covid slowdown. Taking the long view allows us to smooth out this noise and get a better perspective on the long-term trend for the EEI.

Here is the graph of the 36-month running mean of the EEI expressed in HpS, together with a linear trendline: 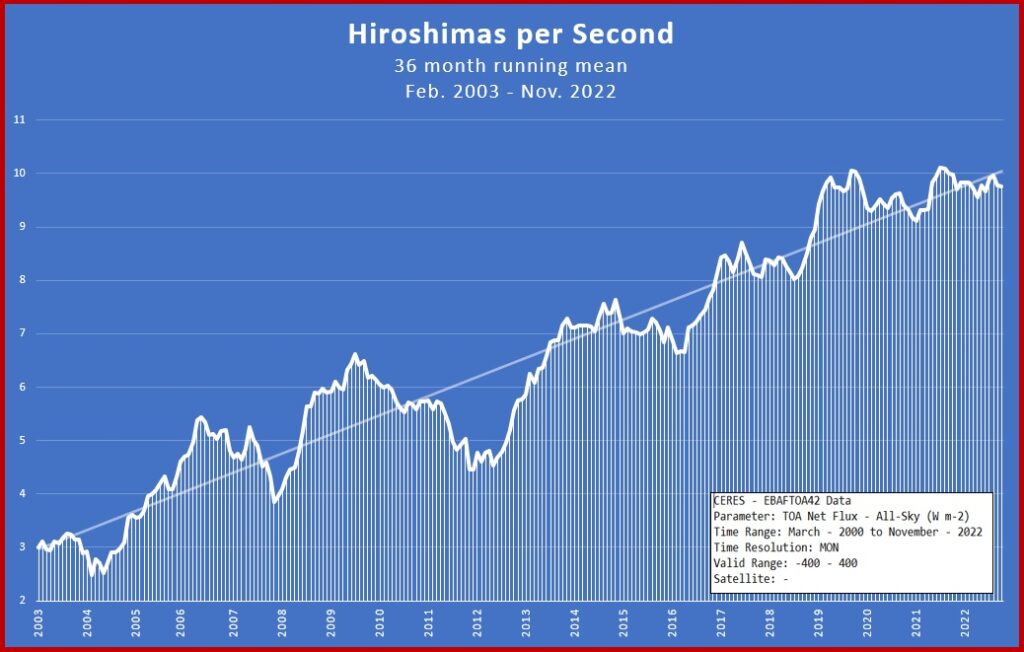 The August data point on this graph corresponds to Dr. Hansen’s 1.22 W/m², which is equivalent to 9.91 HpS globally or 8.9 HpS into the oceans. With reference to the CBSNews article, our sad planet passed the 5 HpS milestone a decade ago.

Looking deeper into this graph, it is just stunning to see that the EEI has risen from about 3 HpS back in 2003 to about 10 HpS today. The EEI has more than tripled in 20 years. That means triple the heat being captured by rising greenhouse gasses. Triple the heat melting the poles, heating the oceans, super-charging storms, baking our continents. Triple the rate of “warming” of our planet.

The next graphic tells how the EEI has changed over time by month, again using the CERES data.

What I did here was to get the average EEI for each of the 12 months of the year, with the average taken from 2000 to 2022.  I then looked at each month and computed the difference of the EEI for that month and the overall average EEI for the same month.  I then colored the month, using a shade of blue if the month was below average and a shade of red if it was above average. The darker the shade, the greater the deviation from average.

You can easily see from this graphic that the tendency is towards red in all months. In other words, the EEI is growing year round.  As the years pass, the planet is absorbing more and more heat. But some months are getting redder faster than others.

The following chart measures the change in HpS by month in a way that lets us determine which month is heating up fastest. Rather than measuring the overall average HpS for each month over the period 2000-2022, what I did was to compute two averages. The first was the average HpS for each month over the period 2000-2017 and the second was to compute the average HpS over the last 5 years, 2018-2022.  I then measured how much HpS had increased each month between those two averages.  This is what I got: 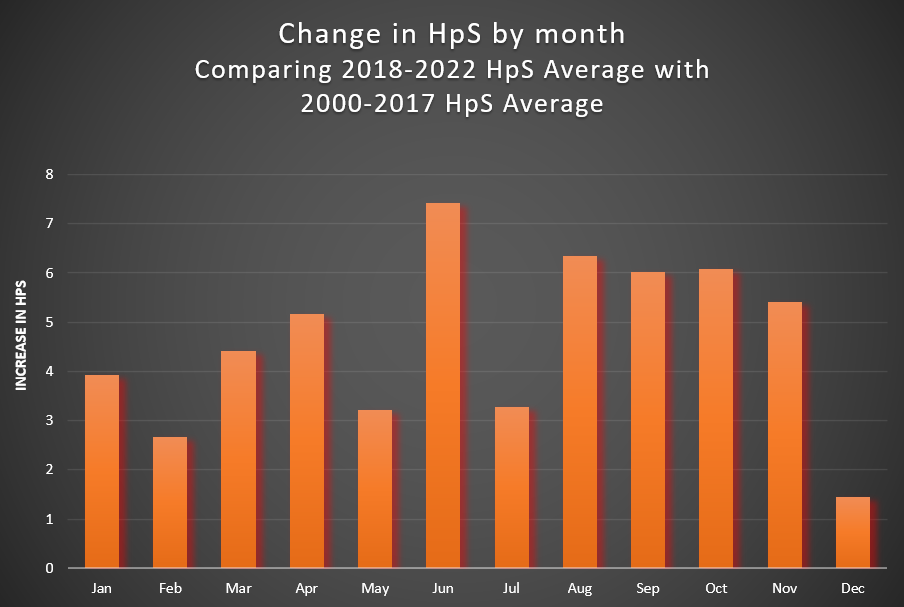 As you can see from this, the month of June is the clear leader. In fact, the number of HpS for June has increased by an average of 7.4 over the last 5 years, while December’s HpS has increased by only 1.4.  In simple terms, June is heating up faster than any other month.

There is no other metric that truly underscores how fast the changes are happening on our planet. Not the Keeling curve or other monthly measurements of greenhouse gasses. Not the rapidly shrinking global ice. Not the rapid rise of the global mean temperature over the 1850-1900 IPCC baseline. Not the burn scars across Siberia and the Amazon. Not the loss of species and habitats. None of these shows what the Earth energy imbalance shows.

The metric of HpS is one that we humans understand. We all have seen pictures of atomic explosions. Their heat is immense. The damage that even one explosion can do to a city is devastating. And yet, here we are, lighting off 9.91 of these bombs every second, nearly 36,000 an hour, over 850,000 a day. Humans have “warmed” the planet by the equivalent of 935,000,000 (935 million) Hiroshima nuclear bombs over the last three years.

We can go even further. If we look at the average HpS over the last 20 years (the period September 2002 – August 2022), then it turns out that the long-term average is about 6.74 HpS globally and about 6.1 HpS into the oceans. At the very lowest end, this is the minimum number mainstream media should report. Anything less than reporting the oceans heating at a rate of 6 HpS (like the CBSNews article) is just hogwash innumerate reporting. And this value is averaged over 20 years, not the most recent value at all.

Adding the last 20 years all up, we get total warming due to the EEI over the last 20 years equivalent to lighting off 4,250,000,000 (4.25 billion) Hiroshima nuclear bombs, of which about 3.8 billion went into heating the oceans.

Our planet is on fire and the fire is getting hotter. We, together with all the living breathing species on our planet, are hurtling towards our collective oblivion. Be kind. Be generous. Be of service.

7 thoughts on “How Many Hiroshima Bombs per Second?”