Have you ever relied on the media for facts and then been disappointed to find out the information is either out-of-date or just plain wrong? Well, that happened to me yesterday as I was working on a Twitter post. I recalled reading a headline about comparing the rate of heating of the planet to a number of Hiroshima bombs per second. I wanted to just multiply that number by 86,400 (the number of seconds in a day) to get the number of Hiroshima bombs per day. My idea was to accompany that with a nice archival picture of a nuclear explosion and everything would be in place for a viral Tweet.

So, I went looking for the answer.  Here is some of what I found:

There are lots more — a simple Google search on “Hiroshima, climate change” will get you started.  I went with 350,000 Hiroshima nuclear bombs per day, to err safely on the low side.  Here is the tweet. That’s just over four Hiroshima nuclear bombs per second. And all seemed good with the tweet until someone rightfully commented that I should show my work.  Well, I can do that! And surprise surprise. The media got it wrong.

It all comes down to what’s known as the Earth Energy Imbalance (EEI). This is the difference between the amount of incoming solar radiation that heats the planet and the outgoing thermal radiation that escapes back into space. As one group of scientists put it in a recent paper, “The absolute value of EEI represents the most fundamental metric defining the status of global climate change, and will be more useful than using global surface temperature.” Unlike weather, which changes wildly from year to year, the EEI is a direct measurement of the rate of heating of the planet. Heat in minus heat out. Couldn’t be any simpler than that.  If you want to take a deeper dive, here is a good article on the topic. 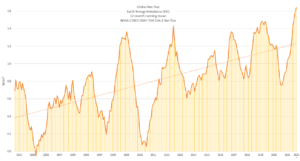 The EEI is measured in units of Watts per square meter (W/m²).  The most recent number for the EEI as published by NASA is 1.64 W/m², from March 2021 through February 2022. The graph to the left shows the EEI over time, click on it to make it larger (thank you Leon Simmons for posting this).

Let’s put this number into perspective. If you think of an ancient 100 Watt incandescent lightbulb and the heat that gives off (they got very hot), imagine gridding off the planet into (roughly) 26’x26′ squares and having one 100 Watt lightbulb in the center of that square all over the planet — including the oceans and poles.  Imagine every single one of those lightbulbs was turned on and left on, every day, 365 days per year.  That’s approximately the current rate of heating.

First question — how many square meters on planet Earth?  If we assume the planet is a sphere with a radius of 6,371,000 meters, then by using the equation for the surface area of a sphere (A = 4πr²), we get a surface area of 5.100 × 10¹⁴ m².  (I hope you are using Google to double check me).  The correct answer is slightly larger than this, owing to geographic features that generate additional surface area — but we will ignore this slight additional surface area, so we can be sure that we are not overestimating the global EEI.

Now one Watt is the same as one Joule per second, where the physical unit “Joule” is the direct measurement of energy. So we get a global EEI of 8.365 × 10¹⁴ Joules per second.  This is such a large number that physicists have come to the rescue by creating the “terajoule,” which is one trillion (10¹²) Joules.  So, a simple division gives a global EEI of 836.5 terajoules per second.

And here is the easy part. How many terajoules in a Hiroshima bomb?  You can Google that and find numbers quoted from 50 to 75.  But we want to be precise here as a point of reference — the Hiroshima bomb was measured as being equivalent to 15 kilotons of TNT. Even though the actual explosion has never been pinned down, we can pin down 15 kilotons of TNT.  Google it yourself: “terajoules in 15000 tons of TNT.” This number comes out to 62.76 terajoules.

According to NOAA (and other sources, once again Google is your friend) the oceans absorb about 90% of this excess energy. Easy math: 90% of 13.3 is 12.0. If we restrict to the heating of the oceans, then they are heating at a rate of about 12.0 Hiroshimas per second or about 1,040,000 Hiroshimas per day.

“The oceans are currently heating at the rate of over 12 Hiroshima nuclear bombs per second.”

The EEI is changing all the time and is mostly getting larger. If you want to keep up on the latest numbers, here are the simple equations you can use for the next mainstream media article you write:

For those who object to the Hiroshima bomb comparison (for any number of valid reasons) here are others.

The current EEI is equivalent to about seven hurricane Katrinas at landfall per second (Katrina was estimated to be about 120 terajoules at landfall).

The current EEI is equivalent to each person on the planet having 1045 100-Watt lightbulbs burning full time, 24 hours a day.