One of the biggest surprises of the last 20 years to those studying climate change has been the realization that there is a counter-effect of cooling going on that is also caused by anthropogenic pollution.  In simple terms, stuff we burn in industrial processes, agriculture and transportation emits lots of aerosolized crap into the atmosphere that blocks or reflects incoming solar radiation.  Most notable among the cooling aerosols are sulphates, which are primarily emitted by burning fossil fuels. While the planet’s atmosphere gets thick with CO2, methane and other greenhouse gasses, the expected warming of the planet has been offset a substantial amount by these aerosols. Below is a map of the distribution of sulphates globally, as provided by CAMS Aerosol Forecasts, showing where things stand today, 09/09/2021. 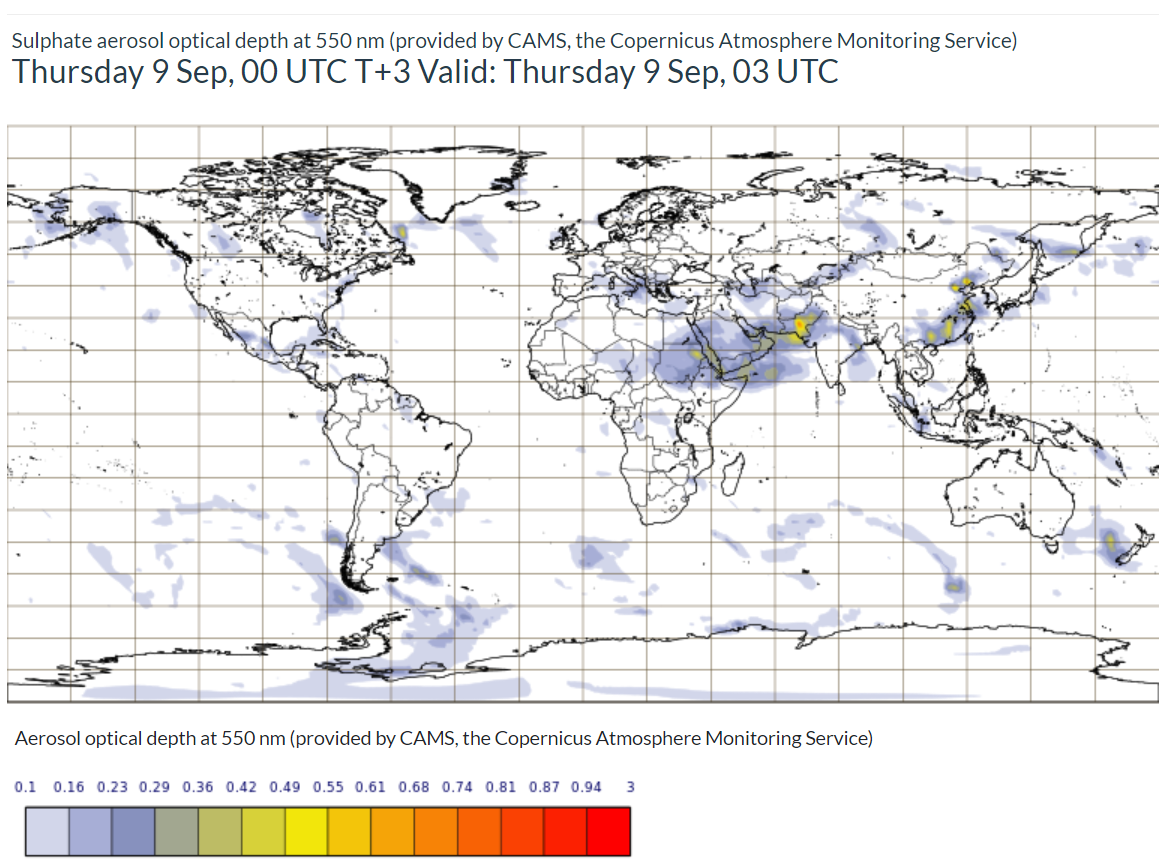 Unlike CO2, which can last centuries in the atmosphere, and methane, which can last decades, these aerosols are much heavier and fall out of the atmosphere in a matter of days to weeks.  Without the continual replenishment of aerosols, the planet would undergo a rapid acceleration in warming, beginning regionally where the sulphates are thickest, with the heat quickly spreading globally. This is exactly what happened in the US in the days following the 9/11 attacks, and then again during the initial Covid lockdowns in March/April, 2020 in Asia North of China.  For example,

According to the latest IPCC report (SPM, AR6 WG1), the net cooling from sulphates is 0.5c, with an error bar from 0.1c to 0.9c.  Other recent work gives ranges up to 1.1c in cooling.  If we take all anthropogenic aerosols into consideration, including organic carbon, ammonia, nitrogen oxide and others, the total cooling effect could be as much as 1.5c.  What this means in practice is that if we humans stop burning fossil fuels and move to clean energy for industry, agriculture and transportation, then we should expect to see a civilization-ending rise in global temperatures if nothing else is done to mitigate the aerosol masking effect. That is, the full steam ahead immediate civilization ending “solution” of stopping anthropogenic CO2 through solar, wind, hydro, nuclear, EVs and battery storage is much worse than the problem of continuing to spew these fossil fuel driven pollutants and facing gradual civilization-ending warming. 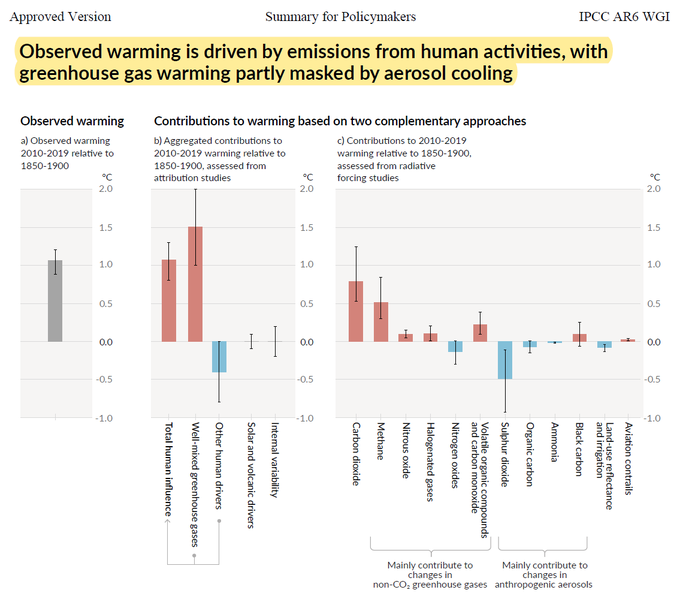 The only way out of this aerosol mess is through massive planet-wide geoengineering as we gradually wind down fossil fuels.  There are a number of projects devoted to “global cooling.”  These include ideas like vast arrays of mirrors distributed over the planet’s oceans to massive numbers of machines that work round the clock pumping naturally occuring aerosols into the atmosphere (like sea salt) to artificial ways of brightening snow and ice to enhance its reflectivity.  Today, governments worldwide are struggling with the basics of keeping their infrastructure intact during ever-strengthening natural disasters and political upheaval.  Given the strain on economies already in place, it is difficult to imagine a time when sufficient human, political and monetary resources will be allocated to any of these solutions to make them actually happen in a meaningful way.

And then, even if by some fantastic turn of events we do manage to find our way to reducing fossil fuels and simultaneously geoengineering planetary cooling, there’s the problem of “unforeseen consequences.”  Once we go down the road of geoengineering, we get one chance to get it right.  This is not a repeatable experiment.  And even if we do get it right the first time, by some miracle of science and global cooperation, we are still destined to meet planetary catastrophe from any one of dozens of self-reinforcing feedback loops already in place.  There’s always something else coming our way. Whether it’s the end of Arctic ice, the slowing of the AMOC, Greenland/Antarctic ice collapse, some new virus or something else, human civilization on planet earth is heading for some tough times.