With everything going on — floods, hurricanes, fires, droughts, heat waves and a pandemic, we forget that California, in particular, is also having a historic water emergency that stands to become all-out water anarchy if we have another dry La Nina winter, as is expected by the latest NOAA ENSO predictions. 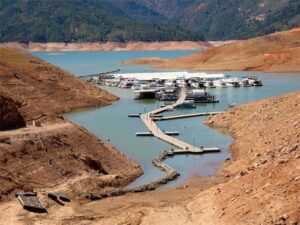 Climate change is global, but the way it will impact each of us will be local.  We will each have our own particular flavor of doom to deal with that is the unique combination of circumstances that will make our home, territory or country unlivable.  It may be floods, storms, rising sea level, lethal wet-bulb temperatures, or some other combination. But it is coming to all of us, much sooner than anyone predicted.

In California, in addition to fires, droughts and heat waves, the most pressing and existential threat we face is that we are quickly running out of water. Very soon we are expecting our governor to issue emergency statewide limits on water use, including cutting off water to some farms and industries.  This disaster is unfolding in real time and there is very little any individual, group, political agency or  billionaire can do about it. No climate action in Europe, solar farm in Arizona or change in how the endowment at Harvard is invested is going to make it rain or snow in California. 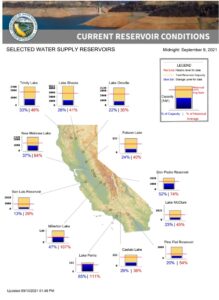 I live in Santa Barbara along the central coast, 90 miles North of Los Angeles.  We are some of the lucky ones — we spent $70 million (to us, it feels like a bazillion) on a desalination plant that went online in May, 2017.  Thankfully, it supplies over 30% of our water, which means in a worst case scenario, the residents of this city will still have water to drink.

Of course, that worst case scenario assumes that we will have electricity to run the plant.  And it assumes that Santa Barbara won’t be overwhelmed with thirsty water refugees coming up from Los Angeles or down from the Bay area. And, it assumes that water thirsty Montecito to our South, filled to the brim with millionaires and billionaires, won’t buy the bulk of the water for themselves in some backroom deal between now and armageddon.

But right now, today, the State of California is on the brink of becoming a full fledged State of Disaster.  It is beyond frightening to live at ground zero of what’s coming our way. They always say, “think globally, but act locally.” Unfortunately, you can’t act at all if you don’t have water to drink.