I was beyond surprised when Michael Mann blocked me on Twitter yesterday.  Mann is the ubiquitous voice of climate change in the media, director of the Earth System Science Center at Pennsylvania State University and pusher of the “hockey stick” analogy for the industrial-age rise of anthropogenic CO2.

I have been fascinated by weather my whole life.  As a child I used to spend hours listening to weather reports on the radio (KNX-1070) and charting the numbers.  The first course I took in college (between graduating high school and my Freshman year) was “Introduction to Meteorology.” As a professor of mathematics at Ohio University, I was undergraduate advisor to the pre-meteorology program.  I have taught many advanced math courses that are technical subject matter used in modeling the climate, including partial differential equations, fourier analysis, probability and statistics and others.  As a former professor of computer science (at UC Santa Barbara), I understand the theory and coding behind climate computer models.  As a consultant to the casino industry, I was creating risk models for unlikely events.  I have been a lifelong student of weather, climate and meteorology and keep up on the latest research.  When I post a “fact,” it is always supported by peer reviewed  journal articles.

So, why did Mann block me?  Apparently it’s because I am a “doomer.”  Doomers are those who clearly see where the planet is heading as a result of the massive and unyielding release of greenhouse gasses.  Doomers believe that human civilization will not survive climate change.  And doomers believe this breakdown will happen in the near-term. Per Mann’s blocking me, apparently I was insolent enough to express my doomer philosophy in a reply to one of his tweets.

Here are the details.  Mann made a Twitter post disparaging doomers, which unfortunately, because he blocked me, I can no longer access.  I was one of the first to reply to his post.  Because it was Twitter, my argument was condensed to just a few fairly obvious points.  I Tweeted that:

That was it — those were the points I made.  And when I refreshed my screen to look at my post, this is what I got: 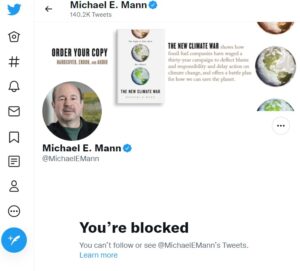 Shocked, I posted about being blocked in my Twitter feed and was amazed at how many responded that they too had been blocked by Mann.  Apparently, Mann views doomerism as worse than denialism.  He apparently views expressing the truth of where ecosystems and human life are heading on planet Earth as a form of subversion to his vision of climate activism.

Here are some of the Twitter replies I received:

He uses the term doomists as a deliberate disparagement, as though we don’t have a legitimate point of view.

I was blocked too, for questioning his stance on doomers. I genuinely expected to learn something or be ignored, not be blocked! I am in good company though it seems which makes me feel slightly better about it.

We have been banned by Michael Mann as well despite decades of campaigning on climate change with credible science and advocacy. He and handful of others seem to think they own the climate movement and will harbor no dissent.

Join the club. He blocked me long ago for suggesting that repairing ecosystems is just as important as reducing emissions.

Who knows Mann’s actual reasoning for blocking people who are interested in the science of climate change, who read and follow the latest research, who pay attention to the IPCC and who discuss the future of the planet in gut wrenching and sad detail.  I hope it is not because doomers threaten the profitability of his books and media life — that would be the cynical perspective.

I am not innocent of using Twitter’s block feature.  I routinely block climate deniers and those who are arrogant assholes in their responses to my Tweets.  Life is too short and times are too tragic to deal with that crap.  But there is no “Church of Mann” where his gospel is the final word.  There is no climate-change dogma that only he owns. By blocking curious, intelligent and fearful voices, Mann is isolating himself to a world of sycophants and yes-men, creating a cult of personality in which he is the charismatic leader.

The world is coming to an end.  Climate change is rapidly making this planet uninhabitable for humans.  Today, as a category 4 hurricane with 150+ mph winds slams into the gulf coast, laying waste to New Orleans, it feels far too late in the game for this kind of bullshit to be taking place.  Then again, it is this type of bullshit (and other carbon rich goo) that got us here in the first place.