“Let’s not worry. It’s too late now. It will always be too late, fortunately!” — Albert Camus, The Fall

We are stampeding towards doom. That’s the big “we,” as in humanity, as in all of us, together, collectively engaging in an unstoppable onslaught against ecosystems, climate systems, vast regions of ice, superheated acidified oceans, permafrost, rainforests and every other life supporting system. It is our collective assault on a billion years of sequestered carbon. It is all of us, the big fat resource-devouring and planet-eating selfish “we,” consuming everything of value as the sixth great extinction takes its course, leaving the habitability of the planet as a legacy to a select few species.

In my Twitter account I post a daily series called “Your Moment of Doom.” In this series, I scour the daily news for an unlikely or novel consequence of climate change that was posted in the last 24 hours. From the future of ketchup to an explosion in termite populations, my mission is to give my followers a larger view of what’s happening to our planet. And in searching for these stories, I also educate myself on collapse, helping to keep my awareness as fully current as possible. My ‘moment of doom’ for today concerned heatwave adaptation research in the wine industry. One thing I’ve learned that is certain: I will never know the full scope of collapse.

This search for daily doom has had taught me that to fully grasp what’s coming is simply not possible. It is an exercise in imagination that we as humans are not equipped to visualize. Take the last few months, for example. In Pakistan, the record monsoon season left over 20 million homeless. This recent article in The Guardian talks about the ongoing impact of this flooding on over 16 million children. Then there’s this article on last Summer’s heatwave and drought in China, which includes this stunning quote: “There is nothing in world climatic history which is even minimally comparable to what is happening in China.” And now we have hurricanes Fiona followed by Ian. As I type this, over 2.6 million humans in Florida have lost their power and an entire region of the state has been decimated, wiped out.

And yet the world goes on.

Here’s the thing, as bad as these events were, the loss of life was minimal. We didn’t see millions die. We didn’t see tens of millions looking for a welcoming country to accept them, feed them and house them as refugees. We didn’t see them turned away, blocked at the borders by militant nationalists, left to suffer in a homeland that has become an uninhabitable deathtrap. And that’s what lies ahead. What we don’t know is when, where or how the first big one will happen.

Horrific events will not happen in some distant future to your grandchildren’s grandchildren. They will never exist to experience these events. The coming first global cataclysm will happen sometime over the next few decades and may happen next year or even tomorrow. That’s the certainty and uncertainty we are living with.

I find those who make firm date-certain predictions of planetary doom, or have a fixed formula for action that will save us, to be far less credible than those who live and cope as best they can with uncertainty. And for me, as a retired mathematician and consultant to the casino industry, uncertainty means considering probabilities and giving odds, using whatever information is available to equate collapse to a roll of the dice or a spin of the roulette wheel. 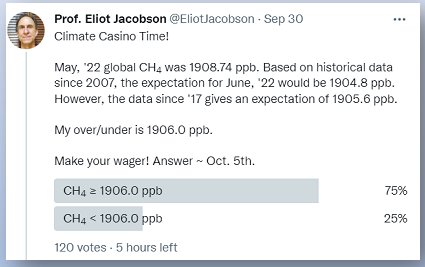 The Climate Casino gives my best estimates of odds for certain events. It is my attempt to say what I know about the future using the language of probabilities. I then post polls on Twitter for people to “fake wager.” I reconcile the wagers in “fake payouts” after the time-stamp for the event has passed. What I have learned is that people are eager to wager that doom is coming sooner rather than later. Most people wager on the side of the worst-case outcome without understanding that the odds are against them. With this knowledge, I move the lines towards doom and am confident, at least so far, that I’ve got the right side of the wager. To the right is a recent example from my Twitter account to show what I mean — 75% of folks are wagering that June’s methane will be over 1906.0 ppb when the 50/50 line based on recent history is 1905.6 ppb. The Climate Casino continues to earn a healthy fake profit. But, sooner or later I’m going to get it very wrong.

This year we’ve seen an ongoing series of climate events described as “once every thousand years.” From rainfall rates to temperature anomalies to the intensification rates of cyclones, to heatwaves, to droughts, to glacial loss, the odds are changing. Uncertainty in a casino means you roll two dice and on average 1-in-6 rolls will be a 7. On our planet right now uncertainty means that whatever odds you thought there were based on scientific research and the historical record, those aren’t the odds any more. The sequence of catastrophes we are experiencing is accelerating. Their intensity and duration are growing. We can look back at the worst humanity has ever had to endure over its long evolutionary path and say it will be much worse than that. Catastrophic events with odds that are once every 10,000 years or once every million years lie ahead for us over the coming dozen or so years. Roll the dice and have them both land perfectly balanced on an edge, a freak circumstance that has never been seen before. That’s what’s coming. That’s what will become common.

We live in a world where the odds are 100% doom, 100% collapse, 100% the end of civilization and the only question is how that sequence of events will play out. We can gamble on the big one being a blue ocean event, a methane bomb from the ESAS clathrates or Siberian permafrost, the sudden collapse of the Thwaites glacier or any other tipping point. I’ve posted odds for some of these. We can gamble on it being some climate event like a flood, drought or heatwave, I posted odds for some of these as well. We can gamble on a political end, like nuclear war or sabotage of a nuclear reactor, water supply, electric grid or the Internet backbone. I have no odds posted for such events, but the fact that they are even possibilities is soul-crushing.

There are too many possibilities, but what we do know is that the first big one is coming soon.

Humanity is never going to change its stampede towards doom. Our uncontrollable genetic drive is personal survival, to fortify our own lives at the expense of other lives, to enrich our personal access to resources to make sure our genes are the ones that survive into the future. This is the concept of the “selfish gene” as first articulated by Richard Dawkins. The selfish gene is not something we can evolve past by a sufficiently well-written essay or a political movement or by bringing awareness to the accelerating catastrophes worldwide. Our genetics insure we will never wake up from this nightmare to a world where every first-world consumer changes their lifestyle to minimize their carbon footprint, where world leaders declare a climate emergency, where corporations give up their evil profiteering and where politicians compromise for the good of all. And even if all of this happened, it is too late. As Camus said, it’s always been too late.

I don’t have a solution. I don’t have a plan or even a vague idea of what to suggest as a plan. I can’t even define the meaning of plan in a world inundated by major collapse events that will be viewed as minor events next year. Every day going forward the planet will roll the dice, and one day soon they will both land perfectly balanced on edge, the climate casino will go bust and belly up, all the tipping points will have tipped, the sixth great extinction will have taken its course on our species, and humanity’s collective great last moment of doom will have come and gone.

Here is Sam Mitchell’s reading of this essay, in case you’d rather listen. He reads a version with a slightly different final paragraph.

9 thoughts on “Your Moment of Doom”