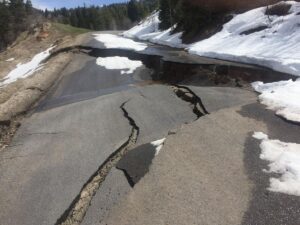 I was recently asked an intriguing question on my YouTube Channel: “Do you (and if so when) think a complete societal collapse will come from climate change?”

My first answer was maybe a bit too simplistic.  I said, yes — but not all at once. Some societies are already collapsing due to the effects of climate change, e.g., on Madagascar. We won’t wake up some Tuesday and have that be the day that “society has collapsed.” It will be little things on a local scale slowly adding up to regional things that slowly add up to global things.

The person who commented was diligent and followed up with: “What do you think is the timeframe for most of the “first world” 5 years, 10-20 30?”

And so, here is my full answer to the question.

Some collapse has already started to happen on a local basis.  For example, there is no more Paradise or Lytton, parts of Louisiana are gone, floods & fires have destroyed and made uninhabitable large areas in the US and Europe. The Western US is running out of water. Heat waves in the Middle East have been terrible this year.

The threats from these impacts are already driving climate refugees to flee from areas of high danger. For example, moving from the fire and drought prone Sierras in the US, or migrating North from the hurricane ravaged parts of Central America.  When the Western US loses substantial water resources, there will certainly be massive migration to more water-plentiful parts of the country. That could begin as early as next year.

If you are asking how long until you can no longer buy food at a local grocery, again that is purely local. Some foods are already harder to find. Wheat/corn/soy/almond crops are way down this year on a global scale.  There are pictures of empty shelves in grocery stores posted with regularity on social media.

Some, like Guy McPherson, boldly make predictions on near term human extinction.  McPherson’s been saying “within 3-5 years” for well over a decade. To me, it seems at best a means to weaken your credibility and at worst wreckless to make such predictions on a planetary scale. You have to exaggerate a lot to things to keep that type of rhetoric going for as long as he has. But that does not mean he is incorrect.  Sooner or later 3-5 years will be 3-5 years.

At this moment in history, a lot has to go very wrong very quickly for first-world societal collapse to happen worldwide. And a lot more than that has to happen before we should be predicting any type of global human extinction.  But extinction is certainly the direction we are heading. It is both terrifying and very sad.

However, since you pressed me for an answer, I think that the next strong El Nino year, whenever that comes, could very well be a tipping point for many first-world societies on the planet.  A strong El Nino could temporarily raise global temperatures in a fashion that pushes other climate systems past their tipping points.  For example, by speeding up the timing for a blue ocean event.  Cascading tipping points could result. The heat a strong El Nino will introduce will compound the heating that’s already taken place. We should certainly exceed 1.5c on a planetary scale during the event. It’s anyone’s guess as to the global mayhem that may come from it.

If there is one weird positive from climate change, it’s that apparently the chance of strong ENSO events has been reduced by the climate change that’s already taken place.  And next year is predicted to be another La Nina year with very little chance of a full-scale blue ocean event or other world-wide catastrophe.  So maybe you can rest easy for a couple of years.