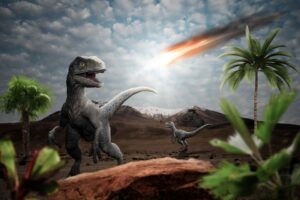 The title refers to the approximate year that an asteroid slammed into the Gulf of Mexico causing the fifth great extinction (the latest research places the asteroid at 65.95 mya, ± 40k years). In particular, it was the event that killed off the non-avian dinosaurs.

We are now in the midst of the sixth great extinction and we are the dinosaurs. In my opinion, 2022 is the year that the metaphorical asteroid will hit humanity and the planet. This is the year the cataclysmic impacts of climate change will strike en masse, affecting all species of plants and animals, no matter where they reside, air, sea or land. In this blog post, I will be making my predictions for what’s ahead in 2022.

First, from a purely numerical perspective, CO₂ will break 422 ppm (parts per million) at Mauna Loa at its peak this coming April, breaching 420 for the first time. 350 ppm was the last viable level (see this article), and breaking 400 ppm was viewed as cataclysmic (we passed 400 ppm in 2013). The last time CO₂ was at 420 ppm was 3 million years ago, when oceans were as much as 100 feet higher and global temperatures were 10F hotter (see this post). And we just keep on going.

We will also see the global average of methane break 1900 ppb (parts per billion) for the first time over the next few months. Even 1910 ppb is in reach in 2022. Methane is over 80 times as potent a GHG as CO₂ over its first 20 years in the atmosphere.

I note that there is a small chance of a massive methane burst coming from permafrost melt in Siberia or the East Siberian Arctic Sea (ESAS) methane clathrates that could radically increase global methane in 2022. What is more likely is that increased methane from these sources will lead to further acceleration of global methane. This increase will defeat the politicized mitigating path forward decreed in COP-26 of 30% reduction in global methane by 2030.

Next, expect novel and tragic climate disasters to escalate. The Canadian province of British Columbia is the model for what’s to come to your neighborhood in 2022. From record heat (Canadian record of 121F), to the fire that destroyed Lytton, to floods that destroyed transportation infrastructure throughout BC, to record cold, the beating BC is taking continues into 2022. The recent wildfires in Colorado near Boulder at the end of December, 2021, fueled by 100+ mph winds and a historic drought, burned with a ferocity that had never been seen in the region for as long as humans have documented such events. The scale, scope and duration of catastrophic climate events to come in 2022 is terrifying. 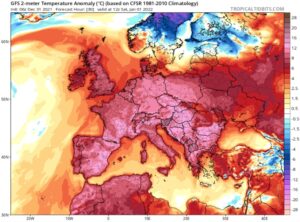 If you haven’t heard, it’s been hot in large parts of the Northern Hemisphere the last few months. For example, on December 26, Kodiak, Alaska hit 67F. Winter heat waves have consumed most of Europe and large parts of the U.S. High temperature records are being obliterated by 10F and more. These heat waves have set the stage for untold surprises in the farm and field.  This article explains just a few of the consequences, which in the U.S. include failed peach, cherry, blueberry and citrus harvests, collapse of bee populations and increases in tick and mosquito-born diseases.

In 2022, we can expect extreme heat and humidity to bring increasingly large parts of the planet nearer to lethal wet-bulb temperatures. Those who can migrate will do so in earnest. Expect climate migration to get going at a scale never seen before as mobile populations look for refuge.  Expect border battles to escalate as nations seal themselves off from the invading “aliens.” Expect heat, drought and water wars to cause civil unrest, desperation, disease and death among those who cannot migrate.

Many countries are starting 2022 with record numbers of Covid cases. While the omicron variant appears to lead to less severe illness (although this study concludes omicron and delta are roughly equal), the magnitude of this wave is sure to cause a tsunami of death and long-term disability. We don’t know what’s coming after omicron, but given the trajectory we’ve experienced the last two years, there is no reason to expect omicron to be the last bullet Covid fires at us.

On the political front, the decline of democratic ideals and the rise of hate is an inevitable consequence of misdirected ignorance and fear. We want something we can control, so we project our fear of the coming collapse of civilization onto a political party or candidate. The media-fueled outrage machine creates and supports the silo of our choice. It’s them. If only our party had full power, all the problems would be solved. Autocracy is the consequence.

Expect the rise of totalitarian and authoritarian governments. Here in the U.S. we have our midterm elections, poised to give new power to States to overthrow vote tallies that the majority in power does not like. Election control has been going on for generations in places like Russia, Iran and China. This year, the U.S. is poised to see the “autocratic party” usurp power for good.

Expect more people to become aware of the inevitability of the collapse of global industrial civilization in 2022. Expect more movement towards the bright green lies of wind, solar, hydro, geothermal and nuclear. Expect more children and working poor to be enslaved in lithium and cobalt mines to feed the first-world’s hunger for clean energy. Among the wealthy, owning a Tesla and having solar on your rooftop (with battery backup) will be the symbol for having done your part to save the planet.

As food becomes more scarce and supply chains continue to degrade, necessities will be harder to find and prices will go up. Expect inflation to accelerate. In the other direction, a long overdue stock market correction will be set in motion by monetary policy and fear. In short, 2022 is the year that the financial “everything bubble” will pop.  Expect the filthy rich to get filthy richer.

There is some good news. I don’t anticipate that a BOE (blue ocean event) will occur in 2022. A BOE is less than 1 million square kilometers of Arctic ice extent at the minimum in September. Nor do I expect the Thwaites glacier (the “doomsday glacier”) to collapse, raising sea level by 2 feet, or for massive quantities of Greenland’s ice to unexpectedly slide into the North Atlantic. These singular tipping points will happen soon enough. The IPCC predicts a BOE by 2050. My personal over/under is 2043 (see this post). Recent news puts the Thwaites glacier at risk in the next 5 years. Greenland had record melt in 2021 that included the first rain ever recorded on Greenland’s summit. Expect the Arctic, Thwaites and Greenland to make it through 2022.

Expect over-population and overshoot to take its toll everywhere and in every way in 2022. There are too many people on planet Earth, too many of whom consume too much. We are a failed and invasive species on a dying planet and these are sad times.

This is going to be one f**k of a tough year to be a plant or animal on planet Earth. As much as you are able, be kind, be generous and be of service.

Here are the top 22 impacts of climate change that we will see in 2022: