I was in a Twitter discussion recently with Dr. Zeke Hausfather, a well-known climate scientist & IPCC author.  Hausfather is a top-notch, first-rate guy in every manner.  He is well-educated, thoughtful in his comments, well-respected by his peers and a great science communicator.  Here was our Twitter exchange, in part.

Depends on ones definition of f-ed up. I’d rather be born in
2022 than in any other year in human history given my odds
of surviving childhood, getting access to education, and
having a long fulfilling life.

There is plenty of data to support the first two quoted facts Hausfather cited.  First, childhood mortality and disease has decreased.  Kids worldwide are healthier and getting better healthcare.  For example, from the IHME: (Click on the image to make it larger) 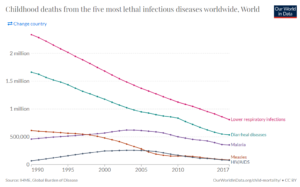 The second fact Hausfather claimed is that access to education has improved.  While this is a broad statement and COVID certainly has caused recent issues, the long-term trends support his statement.  For example, see the “All in School” initiative: 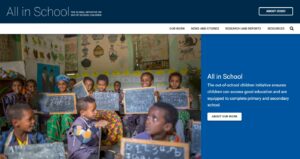 Hausfather’s third claim is that a child being born in 2022 is more likely to lead to a long and fulfilling life than at any other point in human history.

Certainly as diseases find treatments and cures, as healthcare improves, and assuming no pandemics, asteroid strikes or other non-man made catastrophe decimates humanity, the average human lifespan should continue to increase. It should be noted that the bulk of this increase comes from the decrease in childhood mortality, not from an ever-lengthening expected lifespan for a healthy adult.

Likewise, as oil-fueled wealth trickles down, many formerly impoverished populations are now getting more of the basics to support a decent life.  Food, water, sanitation, housing have all greatly improved in many third-world nations.  While the vast wealth and rampant materialism of first-world countries may not have lead us to feeling more fulfilled, and while sugar/fat-caused diseases may have shortened first-world lifespans marginally, that is more than made up for by the improvements in developing countries.

So, yes, Hausfather is right. Start to finish, he is right.

Hausfather’s vision requires infrastructure that can survive ever greater calamities, supply chains that function to allow production and delivery of necessities and food growing regions that aren’t flooded or dustbowls.  Hausfather’s statement requires every element of the architecture of civilization that has allowed us to create this moment in history when 2022 is indeed the best year ever for a child to be born.  Unfortunately, as I described in this post, there are at least 40 reasons why the future will be nothing like the past.

There are two words that describe the disconnect between the incredible successes of humanity’s past and the catastrophic reality of humanity’s future. These terms are defined many places on the Internet (Google is your friend). I’m going to quote the definitions from the Universal Map of Doom by Gail Zawacki.

The first word is “apocaloptimist,” which is defined as follows:

23. Apocaloptimist – A person (or organization) that makes a powerful case that Armageddon is nigh, but posits unsubstantiated hope that human ingenuity will solve the problems in time.

Hausfather is an apocaloptimist.  He is brilliant enough to clearly see where humanity is headed and has documented some of the facts of our apocalyptic trajectory in his own research and writing. But, as implied by his Tweet, he also strongly believes that the climate-saving processes and social movements already in place will be sufficient so that a child born today will live a long and fulfilling life.

The second word is “hopium,” which is defined as follows:

24.  Hopium – arguably coined by Lonewolf back in 2000 on the Survival Acres forum, designating that deranged condition in which a person is deluded into thinking humanity will survive omnicide.

Hausfather uses the word “hopium” in his Twitter Bio, describing himself as a “Dangerous hopium peddler.”  Hausfather’s use of quotes indicates he is including the words of someone who previously called him this.  I agree that this assessment of Hausfather’s hopium is spot-on. Having “hopium” is having a deranged condition in which a person has a certain type of delusions.  Hausfather’s view about long and fulfilling lives is pure hopium.  Human civilization will not survive the massive destruction of life on planet Earth that is already well underway.

The sixth great extinction is not a joke to be mocked in the Twitter bio of a climate scientist, even if by self-deprecating humor, even if quoting someone else. The collapse of this planet is a tragic truth.  I am so sad about humanity’s collective future and the suffering that is to come. It is heartbreaking.  Losing everything means losing everything.

We are on the same side.  We see the same facts.  However, the future and the past have become disconnected. The current stability, wealth and health of humans all over the planet has been created by centuries of innovation and scientific discovery.  And in the last 200 years, humanity’s success has also been driven by extracting material wealth from fossil fuels while choking our planet with poisonous gasses.

Global industrial civilization is coming to an end.  And with it, our long and fulfilling lives.

22 thoughts on “Hopium, Apocaloptimism and Hausfather”